or
Why I'm Glad I Haven't Gotten My Tomatoes Planted Yet. 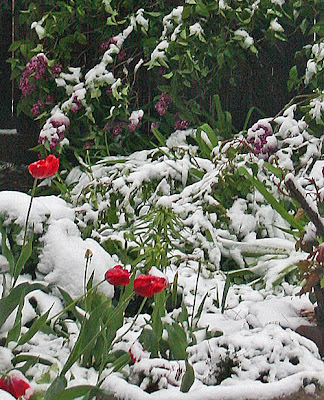 The Girls Are Back in Town

Sachi is looking lovely playing "Me and my shadow."

Kitsu, as usual, is the responsible one, keeping sharp eyes on everything.

I am a lucky human to be under the supervision of such superior cats.
Posted by Wunx~ at 1:58 AM 3 comments:
Labels: cats

I've got to admire their Christmas spirit - and their sense of humor.
Posted by Wunx~ at 11:16 PM 3 comments:
Labels: Christmas

The Last of the Tomatoes

Picked the last of the tomatoes Saturday in the rain

Awoke to a chill vista this morning. Brrr...

Here are the tomatoes: 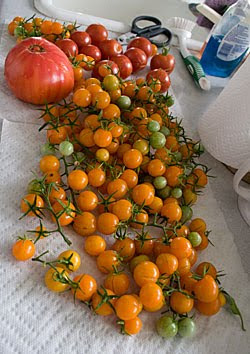 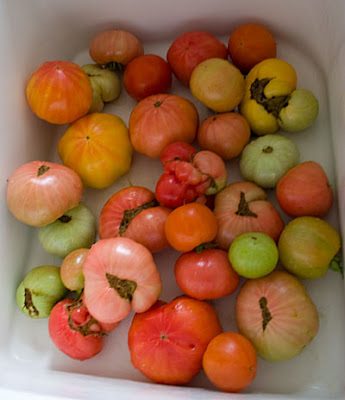 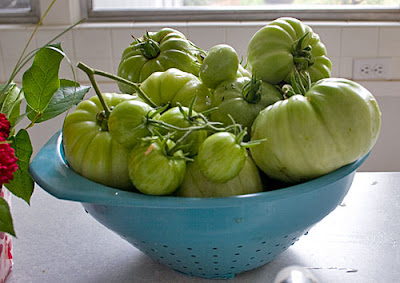 Sunflowers from my back yard.
Posted by Wunx~ at 12:23 AM 1 comment:
Labels: flowers, photo

The fancy-dancy Italian hotel I'm staying in has no Kleenex. I've asked convention attendees who are staying in other places if their hotels have Kleenex.

Went to a pharmacy, asked for Kleenex. They had a few of those little plastic travel packets, but no boxes of facial tissues.

What do Italians do when they have a cold?

(Do I really want the answer to this question?)
Posted by Wunx~ at 4:52 PM 3 comments:
Labels: life's mysteries

This week I have been wandering witlessly in Italy; some days more witlessly than others.

Yesterday I went on a group tour of Siene and was looking the wrong way when my tour group moseyed on down the pike. I turned around and they were nowhere to be seen. Ah well, no biggie; I knew where and when we were to have lunch.

I wandered around on my own for a while then, a bit before the group was supposed to dine, I turned up at the trattoria.

"Scuzi," I asked the lady who seemed to be on duty, "has my group arrived yet?"

She looked appalled. "No! No room! No group!"

Darn! I must have gone to the wrong restaurant. "Gratzi," I said, and headed out to find the right place.

I turned into another alley and, down at the far end of it, saw the tour leader hustling by with the big guy in the white and blue striped shirt. Unfortunately, by the time I popped out on the right end of the alley, they were gone.

I followed in the direction they'd been heading, but never saw hide nor hair nor raised red umbrella (our tour guide's "follow me" flag.) I started going around each block, around and around and around, until I was so dizzy I didn't know in which direction I was pointing. I went into a bookstore and bought a map to try to figure out where the heck I was.

Yup. Should have done that sooner. I was way the far end of the town from where I was supposed to be. I walked to the place I thought the bus should be. No bus. It must have gone to some remote parking spot to wait out the day.

Since I had no way of contacting the tour group, I sent a text to the Engineer: "Lost tour group. Will wait where we met tour leader near public toilets. If I miss them will take public bus back to Florence."

So I hauled my sorry, footsore self back to the spot I knew the tour would pass on their way to the bus pick up and hoped like heck I wasn't already too late.

About 20 minutes later, I saw a red umbrella bobbing above the sea of tourist heads. The tour leader ran up to me, shouting, "Where were you? The man said you were at the restaurant and then you left! Where did you go? I called everyone!"

Guess I should have gone back to the same restaurant again.

I sent the Engineer a one word text message: "Found."

When we got back to Florence, everyone knew I had been lost. The tour company had given a message to the head of staff who had relayed it to the Engineer, whose response had been to say, "Okay," before continuing with his business.

He pulled his phone out of his hip holster and looked at it. "Oh."

Shows how worried he was.

P.S. No photos until I get home; BabyDell doesn't have the brains or the memory to handle them.
Posted by Wunx~ at 5:12 AM 2 comments:
Labels: lost, travel
Older Posts Home
Subscribe to: Posts (Atom)